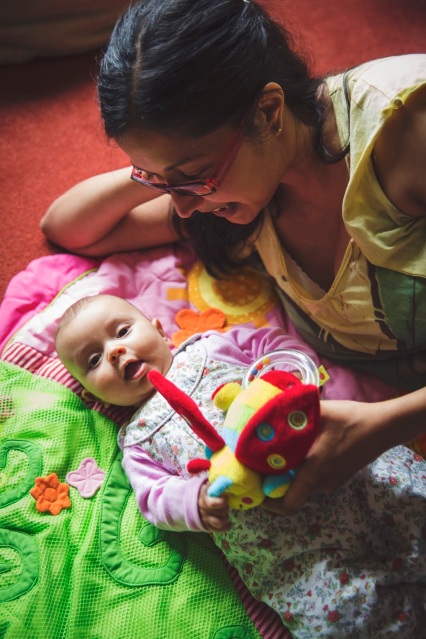 Expectations of Motherhood: I’m not sure what I expected from motherhood. Tiredness, yes, and a heightened sense of responsibility; the knowledge that my life would never be the same again. Other than that, rather than expectations, I had hopes and fears.

I’ve always enjoyed a wonderful family life, and I hoped for more of the same with my own kids. I have close relationships with both of my parents, and I knew that I had great role models to emulate.

My fears, however, centred round the fact that I have never had a burning urge to be a mother. It’s not something I always wanted emotionally (as a kid, for example, I found dolls infinitely dull); nor did any hormonal biological clock suddenly start ticking when I hit my thirties. Instead, I made a deliberate decision to have children when I agreed to marry my now husband, knowing that he was a man who wanted a family – and, more importantly, knowing that he was the kind of man who I would want to have children with, as it’s always been clear to me that he would make a great father.

Still, I couldn’t help but worry – what kind of mother would I be, given that I’ve never felt ‘naturally maternal’? If you’ve read We Need to Talk About Kevin, you’ll know my worst-case scenario: uncaring, emotionally detached mother gives birth to future serial killer… was it in his personality all along, or was it a direct result of the lack of a maternal bond?

Fears of spawning a devil-child aside, I had more practical concerns. Would I be able to bond with my child? Would I have the necessary patience, capability, fortitude to be a good carer and role model? What if I completely lacked the maternal instinct? Would my child sense this about me and somehow be badly affected? What if the baby arrived and I simply didn’t have a clue what to do?

The baby arrived, and I didn’t have a clue what to do. But that, I now realise, merely puts me on a par with most first-time mums.

The cliché is true – nothing can truly prepare you for becoming a mum. As a writer, half of my work is research, so I researched the hell out of motherhood. I read the books, did the classes, investigated online articles and forums – only for an actual baby to enter the scene and throw a big spanner of reality into the works.

That reality is simple: there is no definite answer to many issues and decisions that you will face as a mother – simply because all babies and all parents are different. Google, previously my lifeline, became my enemy, pointing me to all sorts of vastly contradictory information and opinions. It amazed me, truly. How can something that humans have been doing since, well, humans came into existence, NOT be pinned down yet and completely understood? Where was my fool-proof baby manual? With that all-important chapter one: The On/Off Button, or How on Earth to Get Your Child to Sleep? 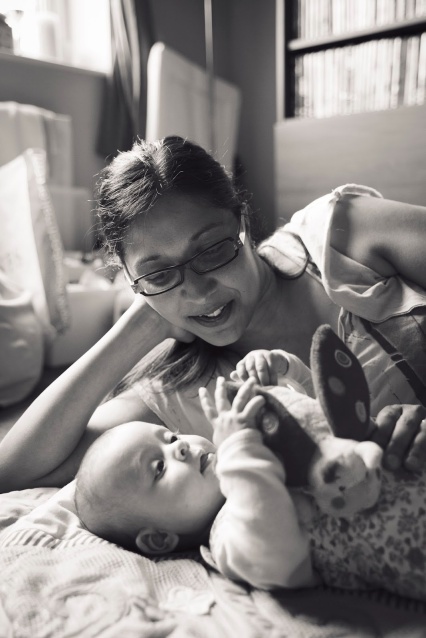 Granted, I’m still in the early stages of this, but motherhood seems to be something you simply muddle through initially, doing whatever it takes to keep your baby as happy as possible while keeping yourself as sane as possible.

The first three months in particular felt like a whirlwind of confusion and frustration. Only after week 12 did I finally feel as though I were able to draw breath and take stock. Breastfeeding in particular came as quite a shock – I didn’t realise how hard it would be, assuming that it would all come, well, naturally. Cluster-feeding most evenings from 4pm until 10pm was exhausting, not to mention the inevitable worry about whether I was producing enough milk.

When the doubts creep in, I keep reminding myself to take a good look at my baby and see how she’s thriving, how happy she seems – and believe that everything does seem to be working out okay. Perhaps I’m even doing a good job. Miraculous!

Taking your child home for the first time: It was snowing as we left the hospital. That’s such an irrelevant detail, but I feel it’s one I’ll remember forever, those delicate flakes floating around our sleeping baby.

After five days of watching our tiny daughter recover from an infection in the special care unit, when it came to going home I found I didn’t have any of those fears about how fast we were driving, whether we’d ‘break’ her, what on earth we were going to do now we were officially in charge. I was just thankful to be going home with a healthy baby.

I do, however, remember arriving at home and putting Maddie down on a mat on the floor, and being amazed at how little room she took up. How could something so tiny herald such a massive change in our lives? 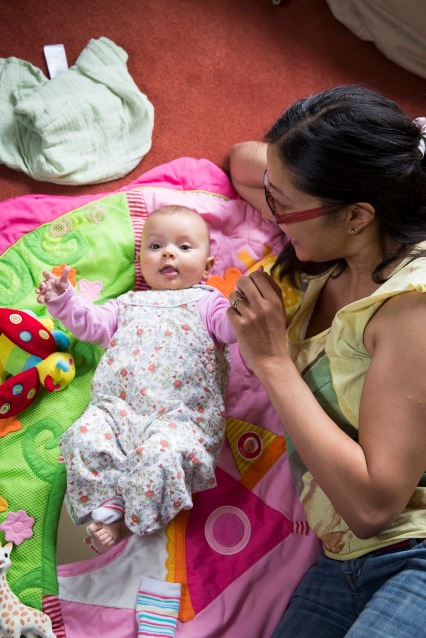 The best/worst advice: The best? Forget about routines. At least for the first few months.

Fair enough, routines might work for some people, but I found they stressed me out – mostly because I couldn’t stick to them. Babies, funnily enough, don’t appear to do what you want them to when you want them to – in fact, they seem to derive great pleasure in doing the exact opposite. Worst of all, there’s just no reasoning with them. Routines made me feel like a failure. Acknowledging that I have very little control over my baby daughter has, conversely, made me feel more in control – of my emotions, and my ability to be a good mum.

The worst? Enjoy every moment – this time when they’re babies is so precious. It’s the best!

Impossible. Some moments you will truly hate and want to leave behind as soon as possible. I’ve come to believe that the cuteness of babies is no accident, it’s

Darwinian; if they weren’t so cute, parents would abandon them without a thought! Hormones don’t help in the early weeks. I don’t think anything has ever made me cry as much as motherhood. Conversely, nothing has ever cheered me up as quickly and successfully as my daughter.

I also refuse to believe that babydom is ‘the best’ period of motherhood. It’s like when people say that your wedding day is the best day of your life. Does life really go downhill from there? Mine certainly hasn’t, and I don’t believe that motherhood will, either.


The hardest parts of being a mother: Sleep deprivation, oh yes. I now know that it is possible to be walking (staggering?) around your home, baby in arms, and suddenly realise that you’ve started to dream – and I don’t mean a daydream, either.

But it’s the all-consuming nature of your new role that I think is the hardest part. Mothering a newborn takes everything – all your time, energy, emotion, attention, commitment. You and only you are your child’s mother – and that can be a very lonely realisation, even when you have family and friends on standby to help.

The best parts of being a mother: Smiles. Huge, all-encompassing, gummy grins that light up her whole face and make the world a little bit brighter. 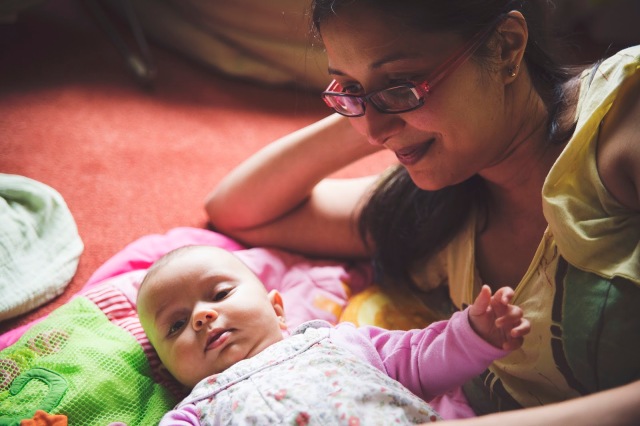 Seeing a little personality start to emerge from amongst the feeding and sleeping. Feeling proud – already – of a determined, curious, observant, sociable, fun-loving, stubborn little monkey.

Having a license to be silly. Who doesn’t love an opportunity to embrace their inner child?

Has becoming a mother changed you? I don’t think so – I’m still the same person. But I have gained new perspectives and priorities. Some things just don’t seem that important any more, while I enjoy taking pleasure in really small things. Who knew that watching the changing expressions and reactions of a small child could be so entertaining?

Hopes for your family: I hope that we’ll be a close and loving family, enjoying lots of fun times and supporting each other through the tough times.

I hope that I can encourage my daughter to be honest with me, and inspire her to be the best at whatever she wants to be.

I hope we’ll stay as healthy and happy as possible.

I hope that one day I’ll get an eight-hour stint of sleep again. 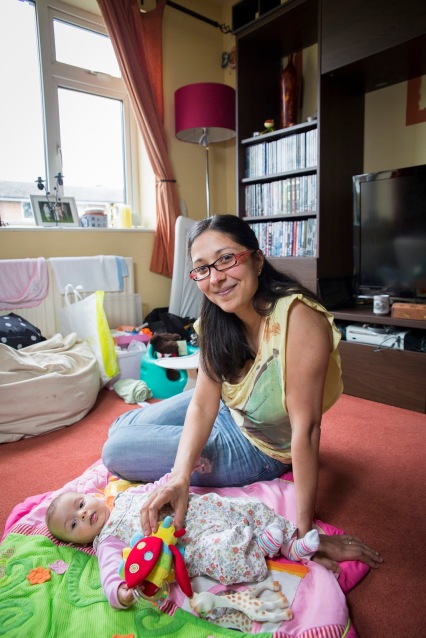 Advice you would offer to new and expectant mums: If you’re breastfeeding, buy a tube of nipple cream that contains lanolin, such as Lansinoh. Essential. (While you’re at it, let your husband know in advance that yes, there does exist such a thing as nipple cream, and you’re not just setting him up for having the piss taken out of him in Boots.)

All babies are different, as are all parenting styles. Don’t rush to be an experts, just allow yourself time to get to know your child and build your relationship – because it will take time. The parenting decisions you make (and break) in the first few weeks of your child’s life will not mentally scar them for life, nor set them up for being spoilt, nor mean they will grow up to hate you.

In your darkest moments, repeat like a mantra – this too shall pass. Everything is a stage with children.

In your best moments, take a deep breath and commit them to memory. Feel proud of yourself for helping these moments happen – they couldn’t happen without you.

Be kind to yourself. Don’t beat yourself up with guilt when (not if) you make mistakes – we all do. You’re only human, and Supermum doesn’t exist. Don’t skip meals. Eat chocolate. And don’t bother with the bloody hoovering.

And, if you’ve not yet had your kid, set some time aside now for some leisurely, non-tired sex. Trust me, it’s soon to be a luxury!

In my former life (to be resumed later this year) I work as a creative copywriter. Find out more on my website – www.rowwrites.com