Life since the last blog post: This is going to be hard to summarise!

I really feel like everything completely shifted on its axis since we were photographed last.

Rufus, our first-born, had been born with multiple medical difficulties and developing disabilities, but had up to that point defied prediction, and after a very difficult start in life was flourishing. Dulcie was a baby, and life was hectic (Rufus had many hospitalisations due to recurrent illness) but we somehow moulded our life around that and found a way to make it work. I returned to work when Dulcie turned 1, and we made the decision to move from Manchester back to West Yorkshire to be closer to my family.

We always knew Rufus was classed as life limited, and at some stage his kidneys would fail as he had Congenital Nephrotic Syndrome, but had hopes that as he’d surpassed predicted age when that would happen, it would be a long way off and perhaps he would be strong enough for renal replacement therapy (dialysis, and then hopefully one of us matched as a donor for transplantation).

In 2015, we decided we wanted another baby to complete our family. We were happy to conceive fairly quickly, but for some reason, call it instinct or mother’s intuition, I was always very worried about the pregnancy. Sadly, at our 20 week scan we discovered that we had lost the baby, a little girl, and I gave birth to her a few days later. We started 2016 pregnant again, only to miscarry earlier this time, at 12 weeks.

At the same time, Rufus’s regular blood work was showing significant decline in his kidney function. We were trialling different medicines and fluid balances, but by April 2016 he had his catheter fitted for haematological dialysis. I took a career break as I was matched as a potential donor, and I wanted to be fully present for this change in his care.

By June 2016, after some life threatening infections and having gone through two dialysis catheters in a very short period of time, we had many discussions with his medical team about the best form of treatment. Rufus had spent his lifetime medicalised and in and out of hospital, but without the cognitive ability to understand the reasoning. Also, because of his susceptible immune system, it was very unlikely a transplant would take, and if we were going to lose him I didn’t want that to be on an operating table.

We decided to take away all interventions, bar those that kept him comfortable and happy and pain-free, and spent the summer of 2016 filling every day with all the things he loved: music, swimming, school and fairground rides. In return, he was the happiest we’d ever known him to be. He was a different child, free from medical intrusion.

We didn’t know how long we had with him, but he gave us a glorious summer, only really falling more seriously ill a few days before he passed away in our arms. We were at Martin House hospice, who helped us make his final summer so incredibly special, and continue to support us all as a family now.

He died in September 2016, and incredulously we found out we were expecting another baby on that very day. After an incredibly anxious and hard pregnancy, Barnaby Summers Dimelow arrived safely in April 2017.

Motherhood since last being on the blog: I thought previously that by touching on feelings of loss (we thought we were going to lose Rufus as a tiny baby, and then the shifted expectations when we realised he was going to have profound disabilities), that I understood what losing a child might be like. In some ways, that stands true.

The finality of actually having lost babies and then a child is a whole other level though. The pain and heartache is overwhelming, and the feeling that this is lifelong for us, is exhausting from the minute I wake up in the morning. And yet, I have two children that need and want me, and bring me so much happiness and that make me feel so incredibly lucky. I live between these two facets, sometimes more in one than the other, and that’s how each day rolls into another, and I think, ‘I can’t believe how fast everything changes’.

In spite of this tragic set of circumstances though, I am still like everyone else I think. Trying my best, making lots of mistakes, with my eyes on the prize of bedtime every day, when I can tiptoe in on my sleeping cherubs and forget all the shouting and f*ckssakes in my head and look at them in wonder.

I still have to make space to parent all three children, even though one no longer physically, and that’s the thing that’s hard to ensure. ‘Me’ time is actually more likely time with my thoughts and memories of Rufus, of which I count myself lucky to have so many of, and so many positive associations with our choice to let him go peacefully.

Has motherhood changed you?: Undeniably. I feel stronger because of my experience, even when the pain is too much to bear I remember I can withstand it. When you can weather that storm, I feel like there’s not much else you can’t handle. When the stresses of everyday life feel all-consuming, there’s no doubt that I can think on what we’ve been through, and what truly matters in life, to work on a way to solve them.

I am exhausted. Grief tries to obliterate so much of your energy, as well as having a newborn, and a headstrong 5-year-old. I have so many more lines and grey hairs, but recently I am getting back to running which has been a saviour for me since becoming a mother and I’m just seeing its restorative effects coming into play again.

I think we all know that feeling of true sacrifice when we become mothers, that you know, in an instant you would give your life before any of your children. The agony of having to put the quality of Rufus’s life above its longevity has tested me and us as a family immeasurably.

I now feel like I understand what true sacrifice is: it’s not giving your life over your children, it’s agreeing to live out your life without one of your children.

Besides all that though, it hasn’t changed me. I still love frivolous things, and being with people. I am not superhuman because of it. I am as likely to say the wrong thing to someone else is to me. My pot of forgiveness and understanding the depth of intention behind action has grown immeasurably though. I suppose that’s growing up isn’t it? I’m grateful for that perspective. 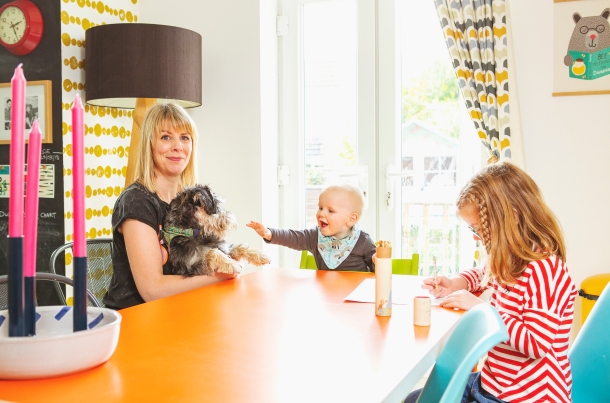 Hardest parts of being a mother: Being a mother to children that aren’t with you physically. Learning how to still make space for Rufus in our everyday is still a work in progress.

Forgiving myself- I’m a reactive kind of person that then berates themselves for their actions later. This is hard as a mother when you’re trying to bring up less reactive and more grounded children, especially when one is a carbon copy of you (I’m looking at you Dulcie).

There was a moment the other day, when I’d got out the shower, and I’d managed to get my underwear on but Barnaby was howling for a feed. So I sat on my bedroom floor, and breastfed him in just my bra and pants. To encourage Dulcie to get ready for school I was allowing her to brush my wet, tangled hair in a payoff that once I’d finished feeding Barnaby, I would need to do her hair. I was so physically entangled in my children, with any priorities of my own completely at the bottom of the pile, and I thought, ‘This Is Motherhood’. Best parts of being a mother: The cuddles. The unadulterated love they have for you. The tenderness after a huge tantrum, where they’ve scared themselves but then physically need to be reassured. Watching them grow, and grow. Remembering their personality in your life forever, no matter how long they existed for.

Understanding that your own parents love you this fiercely too.

What you wish you’d known before having children: I’m not sure really anymore. Anything like sleeplessness or a deeper understanding of patience, or appreciate your time alone feels like just icing on the cake.

The main part, the cake, is just accept the fear. The fear that it may, and can, go wrong or badly. Learn what is within your circle of control and let the other stuff go. I say this having survived my last pregnancy with my emotions and anxiety in tatters. If you’d have asked me a year ago, I definitely wasn’t accepting of the fear.

Any more advice for mothers and expectant mums: Trust yourself. Don’t make yourself an Island, but be sure to take care of those times when you need your own headspace.

Some weeks I can manage coffee, chats and playgroups, other times I know it will deplete me of the last vestiges of energy I have so I hunker down and restore them, and I make no apology for that.

When I return to work next month, I know I will have to apply this in an even wider sense. So I’ll be having to eat my own advice and trust myself to regulate that.

Liz writes about her experiences of motherhood, here at: areyoukiddingney.co.uk 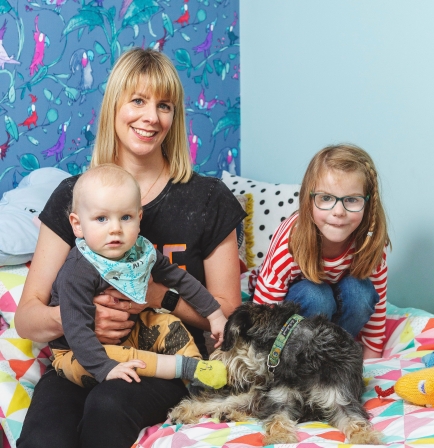