Name: Hannah
Children: Louis, 4 and Remi, 3
Location: Prestwich
Expectations of motherhood: To be honest, I can’t really remember. I didn’t anticipate having two in such a short space of time so I thought it would be a lot more relaxed than it has been. I grew up in New Zealand and when I was 20 I volunteered at the women’s centre there. On my training this woman told us this story about when her husband was at work her and her kids would just lie about in the grass naked all day. I thought things would be like that. I thought that I would be able to go out and do stuff with out my son and it would be no hassle. I thought that I would be calm and able to deal with things in a logistical fashion. Oh, yeah and I thought I wouldn’t feed them crap EVER and they’d never watch TV.

Reality of motherhood: Pretty much the complete opposite of all that.
For starters, we didn’t even have grass in the house we lived in. We do now, but I can’t justify time lying around doing nothing with all the other shit I have to do. I didn’t realise that my child and then pretty soon after, children, would be so dependent on me, as in, I am their first port of call, as in, I am the one they whine to first. I am the one they demand wipes their ass. Even when they are sat right next to their dad, I am the one that has to get the drink. I interrupted study to have them, so after I went back I had a certain amount of freedom and purpose. But then once I graduated, it was like those first few months of complete loss of identity. They weren’t in nursery as much and any time I had free I needed to make money. I had finished an art degree, I want to be an artist and I need to create. It took a long while to come to the realisation that this is my situation and I need to adapt. But I am not calm and they frustrate the fuck out of me. I am not a generally patient person and they test that so much. And TV and crap food are my saviours and I don’t even feel bad about saying that. It’s not all the time, but I definitely do not have guilt about sticking the tv on so I can make tea, or going out for pizza because I can not deal with getting home, making tea late, getting to bed late and then having to wash pots. 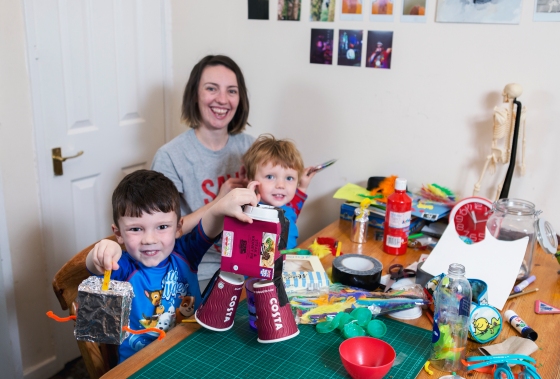 Taking them home for the first time: With Louis I was terrified. He wouldn’t stop crying. He wouldn’t take to the boob. I had to stay in hospital for an extra couple of days while we waited to see a GP because I had an infection and they needed to make sure he was ok but I relished that extra time. That nurse button got hammered. There weren’t going to be nurses at home and that was worrying because I had no idea what I was doing.

With Remi, he was born at 7am and I was home by 2pm. He took to the boob like a dream and slept quite a bit and plus it had only been 15 months since I’d done it the first time so I felt like a pro. Ha ha.
The best/worst advice: To me, all advice is nonsense. People always want to tell you what they think is right and half the time something in the situation is different. I’d much rather have a conversation where people talk about their experiences or techniques they’ve used. But when Louis had constant colic the doctor told me to imagine the bubbles in his stomach like little bubbles in a bottle of pop, and if I wanted to get them out, little taps at the bottom to get them to join up is the best way to get them out. And I have shared that when I felt it was necessary.

Oh and also, advice I am yet to use so I don’t know that it’s good, but a teacher relative told me once the kids have mobile phones to make sure before they go to bed they hand their phones over, right from the start, so that it’s habit so when they get to teenage years, its natural.
Hardest part of being a mother: The constant stream of never-ending bullshit to do. Like, there is never any let up. Not a day to actually stop and do NOTHING. Because even if you do you are always thinking of the five hundred things you could be doing.
The best part of being a mother: All the stuff that makes you burst with pride and cry because you made them like that. Like when they are funny or clever or loving out of the blue. 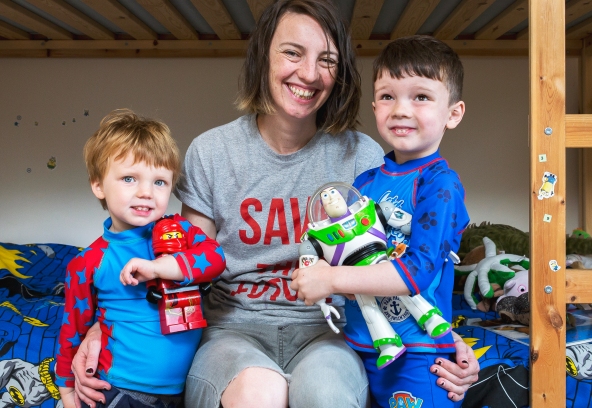 Has being a mother changed you? Absolutely. I started an art degree before I had them and when I went back I could not even relate to my old work in the slightest. I can’t remember that old person. That person who would sit and waste time reading shit magazines out the newspaper. And I think there will be a time when I can do that again, but it will be in a completely different way. I think for a while I thought I can’t wait to get my “old life back” but you never do, and that is an important thing to come to terms with. You will never be the same again, you have to adapt to what you are with children and grow into yourself.

Hopes for your family: I hope that I can provide a bit more stability for the boys. I would never be a 9-5er but I’d also like to not be struggling financially for ever. And I’d like to think that all the things that we are doing to make them open and respectful kids has an impact.
Any advice to offer new or expectant parents: Like I said advice doesn’t really mean anything, but I would say not to put pressure on yourself if things don’t go the way you thought. Don’t get caught up in the Health Visitor pressure either. If you’re doing what you think is right, then you’re right.