Expectations of Motherhood: As soon as people found out I was pregnant they would exclaim, ‘You will never sleep again!’. So this was my main expectation.

I felt like I was preparing myself for a tornado, but somehow, nothing can ever quite prepare you for the sheer and utter madness of the first few months. I was also very scared that my child wouldn’t like me and vice versa. In a very hormonal, overdue state I googled which star sign my baby was likely to be. He would most likely be an Aries. I then googled ‘famous Aries’ and one of the first results was Adolf Hitler. I think I must have been quite emotionally charged at the time, as this felt like an ominous sign so I poured myself a shower and sobbed for an hour.
I have a very close relationship with my own mother but we have had quite dramatic ups and downs so this possibly contributed to my fear of parenthood. I also found it hard to believe that we would ever have a healthy child as we had a late stage termination with our first baby in 2014. She was a little girl and we named her Alma. She had an interrupted aortic arch in her heart and was diagnosed with DiGeorge syndrome. We chose to end her life at 24 weeks and gave birth to her tiny body at St Mary’s hospital. The idea of having a healthy child seemed impossible at times. Overall, I felt fearful. 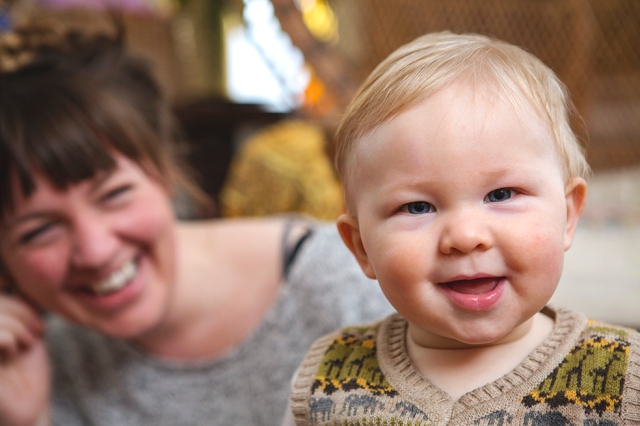 I was correct. I have barely slept more than two hours at a time in 11 months. But what I wasn’t prepared for was the overwhelming love and joy I feel hanging out with this hilarious human that has appeared in our life. I couldn’t ever have imagined how deeply I would love him. It hurts my heart when I look at him inspecting his peas on his plate and babbling earnestly about something or other and pointing out the buttons on my shirt. I have chosen not to return to work (a combination of childcare costs and feeling ready to move on from my previous work), so being a full time stay at home mum means that I am at the 24 hour mercy of another person’s whims and desires. The days often feel long and repetitive and occasionally I feel deeply bored, but there is also much delight in the small moments. Moments when Gryff tries a new food, or learns how to open a drawer or decides that being chased is the most hilarious thing to ever happen to him. These moments stop me in my tracks and remind me how lucky I am to witness them. And the laundry. No-one can prepare you for the laundry, especially if you use reusable nappies.

Taking your child home for the first time: We had Gryffin at home as we had hoped. He was born at the bottom of our bed in the midday sunlight. Unfortunately I had bad tearing so an ambulance took us to the hospital shortly after and we had to stay there for six hours while I was sewn up and the midwives helped me latch Gryffin onto my breast.
When we returned home I was nervous to be left alone with him. I hadn’t yet felt the surge of love that so many mothers describe, I was nervous of him and felt awkward around this person I didn’t know. I was confused as to why he couldn’t simply ‘be’. He was either asleep or awake and crying or trying to feed but failing. We would sing to him, rock him and dance with him but the only thing that could calm him was ‘All Night Long’ by Lionel Richie and it still works eleven months later.
Three days after he was born I was sat staring at him in bed and suddenly realised that one day he would leave home and I started crying uncontrollably. I think the love hormones had finally started to kick in.

The best advice: The best advice I have received and keep on coming back to in moments of doubt is to find your own way as a mother. I am highly skilled at comparing myself to others and endlessly worry that other mothers are far more attentive/fun/creative/careful etc etc etc. But it is so true that you just need to do what you need to do to get through the hard times and try and retain a smidge of your sanity and keep your baby safe. There are as many ways to mother as there are mothers and children.
Also, to visit a cranial osteopath. Gryffin cried endlessly for the first six weeks until we took him to see a cranial osteopath and after six sessions he was a different baby. It’s easy to forget that the birth process can also be a traumatic experience for the baby and they can experience injuries. I’m not entirely sure what the osteopath did, but it worked. Gryffin has been so much happier since.

The worst advice: The old ‘You’re creating a rod for your own back’ adage. I understand it but I don’t necessarily agree with the principle. I co-sleep with Gryffin and feed on demand. We never decided that we would ‘follow’ attachment parenting, I only found out that it was a style of parenting once I was doing it. It’s not right for everybody but it works for us. If your instinct is leading you somewhere with your baby, it’s most likely that you know best.
The hardest parts of being a mother: The lack of sleep has been (and still is) very hard. It affects your mental health, your tolerance levels, your ability to be patient..all the things that are pretty necessary to be a warm and loving mother! I find it extraordinary how many times I have truly believed that I cannot give another ounce of my being and then somehow…carried on.
And knowing that Gryffin will be hurt is deeply upsetting. I try not to think about the heartache he will go through once he starts to understand the world in a more sophisticated way. The current political situation is weighing heavily on my mind for his future.

The best parts of being a mother:

The warm, cosy, deep bond Gryff and I have. Today it took me an hour to get him down for a nap and I felt like I was losing my mind, but then he slept next to me for a while and when he woke up he was soft and rumpled and delighted to see me. He lay back on my legs and babbled about something very important in the dim light of the bedroom. My heart was brimming over and I felt so lucky.

Also, after giving birth my body simultaneously felt like it belonged to a seventy year old who had been in a car crash and the body of a warrior/super hero/feral beast. It was pretty incredible to know I had grown a human and pushed him out, I felt so invincible that I then ate some of my placenta raw in a smoothie. It felt fitting after having done something so powerful. Whenever I feel nervous or anxious I try and remind myself that I can be incredibly strong and the birth is a perfect reminder.
Has becoming a mother changed you? I feel that the world sees me in a different way. To some people I am invisible as a body behind a pram, and to others I am now a valid member of society because I have started my own family. I find this disconcerting.

I am still struggling with my shift in identity, figuring out which parts of me remain now that I no longer do the job I used to do, socialise in the way I once did or wear the clothes I have packed away for a distant day in the future. What of me remains, who am I now? I spend my days hanging out with a soon to be toddler playing with bricks and the sock drawer. In the evenings I go to bed at 7pm with Gryffin (because he won’t sleep without me and I can’t bare to let him cry) and watch tv on the iPad. Who does that make me?

Hopes for your family: I hope that we can offer Gryffin a firm enough foundation to allow him to grow with confidence and security. I would like him to feel safe within his family and to understand the importance of generosity, kindness and celebration. We would like to have another child so that he can have a sibling for him to moan to about us when we are old farts. 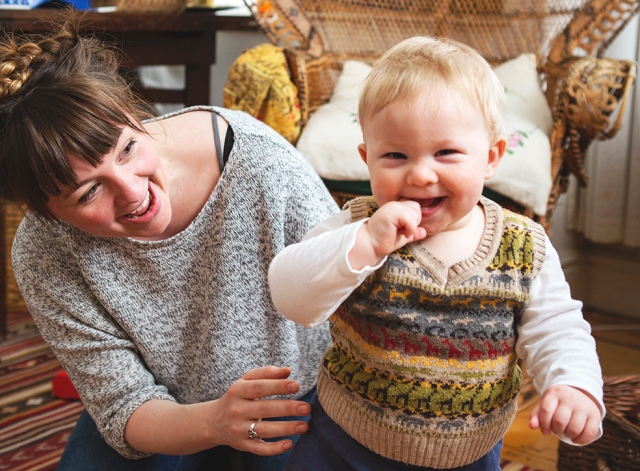 What advice would you offer to new and expectant mums? Embrace it, embrace the pregnancy, embrace the early days and surrender to them. I felt pressured to get back to ‘normal’ and cook meals, hoover and run errands while Gryffin was tiny despite it feeling impossible. I wish I hadn’t put that pressure on myself. It is a precious time and I’m only just starting to realise that it’s one of the fundamentals of being alive. Not the only one, there are many, but it is certainly a very joyous and beautiful one.

Other info:
We had a termination when our first baby was 24 weeks in the womb. Making that decision broke my heart and affected me profoundly. Even though our baby wasn’t alive I had become a mother, so when friends around us started having babies I felt a lot of bitterness and jealousy that they were recognised as mothers because they had a baby in their arms. We named her Alma. We buried her ashes on my favourite hill in Glossop. Her brief visit taught me about love in a way I hadn’t experienced before. Our son Gryffin was born exactly a year after her due date in March. I wrote about the abortion on my blog http://www.javabere.co.uk as I struggled to find anything online about people’s experiences regarding late stage termination. I think there’s still a lot of taboo surrounding it. The incredible thing is that once friends and family started to find out what had happened, so many got in touch and shared their stories. Being honest about the painful stuff can be incredibly powerful.

One thought on “Java and Gryffin”