Location: Preston (Just moved back from Spain, where the boys were born and I lived for 13 years)

Expectations of Motherhood: Years before becoming a mum, whenever I thought about motherhood, I envisaged a huge kitchen table full of children, sticky hands, dogs running around and random people eating cake. I most definitely wanted to be a mum though, I just didn’t really have a clue. All I knew was that any child of mine would be massively loved and wear dungarees. I also thought I would just carry on my life as it was with my baby. I was living in Spain, where we went out most nights to gigs etc. and people met up about 11pm. I had visions of taking the baby with me in his sling….

Reality of Motherhood: Sticky hands, dungarees, and love in oozing abundance. Unfortunately, when I had my first, I didn’t have any other friends where I was living (Spain), who had babies, but that didn’t really matter as I was in a baby bubble and didn’t really mind. But unfortunately come 7pm, I could be found slumped wherever after a feast of leftover baby mush and not even remember my name, let alone get it together to go out for dinner at 11pm. That was the new time for breakfast in our house!

Losing friendships. Inadvertently, I became an outsider and lost a lot of friendships, I suppose you can only refuse invitations so many times! Luckily I stalked someone that my partner knew who was pregnant and we became firm friends and just having one friend to walk around in a zombie snot covered state with, is the best.

I also had no idea that breastfeeding hurts. In the movies, the midnight feeds look so beautiful and peaceful. My first days involved bleeding nipples, tears (mostly mine) and mastitis. BUT then somebody mentioned nose to nipple, which for me was like winning the lottery. No more biting or bleeding, result! I breastfed for a long time after that. But I didn’t really have any guidance or support at the beginning, so just muddled through.

I also always say that it would be brill if we could have our second child first. I think you do it better with your second, because you’re just generally more chilled out. When Otis cried, even if he was 2 cms away, I would gallop to him and if somebody had offered me a helicopter, I would have taken it, Fèlix most definitely benefited from me being more chilled out.

Taking your children home for the first time: When I took Otis home, I was overwhelmed by the stillness and the calm. I was in hospital for almost a week with him and I hadn’t realised how hectic and noisy hospital was.

It was also a bit manic, I remember us being inundated with visitors, a day after we’d got home, there were 16 people in our not very big lounge, who had just popped in to see us. It was very surreal and I think I actually ended up sneaking off for a nap with Otis!

With Fèlix it was different. Again, I’d been in hospital for five days and I missed Otis massively. I’d had my second C-section and been told to rest and not lift heavy objects. On the way back from hospital, we swung by Otis’ nursery where I virtually ran in and swooped him up with excitement and mostly spent the first year with two children hanging off various parts of me. In fact, not a lot has changed!

The best/worst advice: This sounds SO obvious. But pick your battles. What’s important? Does it really matter that your child is filthy 3.5 seconds after you´ve dressed them? No, of course not. That’s why washing machines were invented.

The worst advice was to give my teething 5 month old a dried apricot to suck on to ease the pain?!! Next thing I knew, small 5 month child was struggling to open his tiny mouth due to giant apricot obstruction. It was a split second and nothing sinister happened, but I was aware that the consequences could have been hideous. 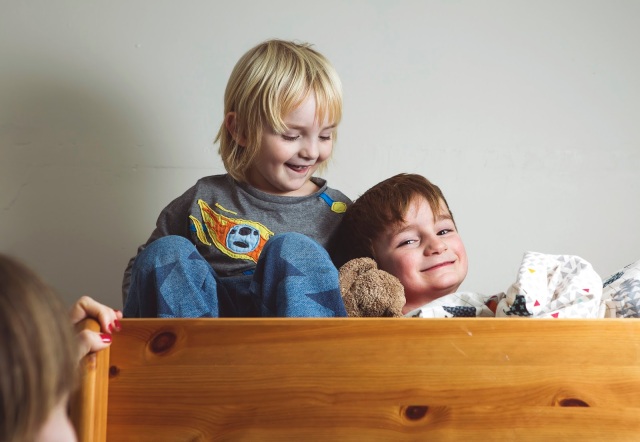 The hardest parts of being a mother: That you are supposed to know EVERYTHING. From fractions to the answer to Why? Why? and why? I bought an Usborne General Knowledge lift the flap book, under the pretense of it being for the boys. It was so obviously for me!

Being strong and keeping it together when everything is actually falling apart. You are your child’s reassurance, you need to promise them that it’s all going to be alright and find the words to tell them when it isn’t.

Also when the boys are happy so am I. If either of them isn’t, it breaks my heart into smithereens. It is so true that you would fight off dragons in nothing but your pants with a spatula if you needed to.

The best parts of being a mother: Pretty much EVERYTHING! It rocks! The randomness, the fact that these two small people are hilarious and you get to live it. It’s brill. Also of course, no matter how rubbish the day’s been, or how feral the kids have acted, there’s always a moment of rip-roaring comedy (normally very slap-stick) or an impromptu outpouring of love. Nothing beats that.

Has becoming a mother changed you: Yes, it’s definitely given me a purpose, a reason and direction. Giving up is not an option. Ever. You have to keep on going for them, always. It’s also given me a sense of what’s important and what’s not. At the end of the day what matters is that the boys are happy and well and feel safe, not that the house is clean. I think I’ve got a general grip on myself. There are moments when I think I’m not grown up enough to be responsible for two actual people, but I recently bought an actual grown up bag instead of my usual bag for life, which I think is a positive sign.

Hopes for your family: Obviously health and happiness, and for them to be grounded with a great understanding of what’s right and wrong, but I hope they know that they will be supported in whatever they choose to do and that I will always be here for them, always. Nothing is too big or too small. I want them to look back on their childhood and say, “Well that was a bit bananas, but we had loads of fun” and obviously to never doubt how much they are loved.

What advice would you offer to new and expectant mums: Follow your heart and your instinct. People, especially random strangers are really good at giving their opinions, especially when you don’t ask. What works for my child, won’t necessarily work for yours. You know your child best, do what’s best for you and them, not what Supermum is telling you to do.

Find a friend with a baby/child. Do it! When I had O, I made one local friend who had a baby too and it was the best thing ever. Through joining things and just being able to have a coffee with somebody in the same zone as you is a blessing. Also, leave the house at least once a day, even if it’s for a 1 minute walk.

Also, my pet peeve; Boob versus Bottle. This makes me want to scream loudly. My advice is, do what works for you and your child. If you can and want to breastfeed, then brilliant or if you can’t or don’t want to, also brilliant. It’s YOUR choice. Not society’s, not the midwife’s, not your neighbour’s. All that matters is that your baby is loved and getting fed. It doesn’t matter HOW. It doesn’t make you a better or worse mum for choosing bottle over boob.

I’ve just realised that possibly wasn’t advice, just me jumping on a soap box! Sorry, it just drives me bonkers!

Other info: I have a blog where I post from the frontline of parenting.
www.muddlingthroughthemayhemofmotherdom.com