Expectations of Motherhood: I suppose I hoped what everyone else does – that you won’t change that much. You’ll still travel, get to gigs, the cinema, eat out, wear clothes with non-elasticated waists, get through a day without discovering some piece of discarded food in your hair . . .

Reality of Motherhood: Who knew what a journey this was going to be?
I fell pregnant straight away and was textbook thrilled/excited/nervous.

Then at 13 weeks I had a miscarriage.
I’ll never forget going to hospital with horrendous stomach pains and the midwife asking me, “How far apart are your contractions?”
And I thought, oh god – I’m in labour, but there won’t be a baby at the end of it.

Looking back, that was the first moment I realised that being a mother is never what you expect it to be. But I did know that whatever it brought I wanted it more than anything.

It took a few months to get pregnant again (in which I really struggled with depression), but then In Feb 2007 I fell pregnant with Lyla. I remember how nervous I was at the six week scan, but saw a heartbeat and a teeny baby, and in October she was born – healthy and beautiful.

I remember on about day four thinking, “What ON EARTH have we done?”
I couldn’t imagine a time when we could ever go to the shop / a friends’ house / on holiday EVER again.

When we decided to try for baby number two, again I fell pregnant immediately. At about five weeks I suddenly got really nervous that I would miscarry again – and so the great early pregnancy unit at the MRI gave me a scan and at six weeks I saw a teeny baby and a heartbeat and was euphoric.

At about twelve weeks I was at work and had the tiniest drop of blood. I phoned the midwife who reassured me it was nothing, but as the evening went on I just got more and more scared. They gave me a scan the next day and I saw my little baby, who, according to the size charts, had died two days before.

With my next pregnancy I got through three scans before the baby died – with the two after that I miscarried before the first scans.

I feel so much empathy with anyone going through any fertility issues and know that it does affect everyone differently but the feelings of grief, failure, self-loathing and desperation that I experienced were overwhelming at times.

Were you a “mother’ to those never born babies just because you never held them and fed them or not? I don’t know. 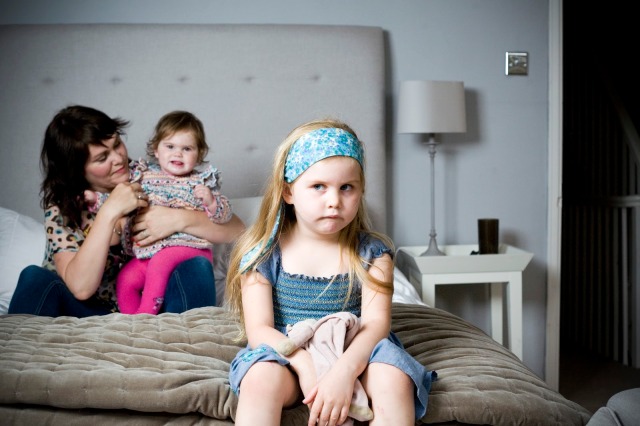 In September 2010 I remember thinking I can’t do this anymore – it’s one last try and then . . well I didn’t know what the end of that sentence was, but that last chance hotel was our beautiful girl Britta.

And until the moment at 40+2 that I held her and heard her cry I can honestly say I never never thought she would arrive safely.

She did arrive safely, but she then had colic, and she NEVER slept and she cried alllllllllllll the time and I remember thinking “What? – you were SO wanted and we went through so much to get you and now it’s like some kind of waking hell!”
As I said . . .things are never quite as you expect them to be. She remains a challenge(!) She’s also so full of life, energy and joy, I wouldn’t change a thing.

Taking your children home for the first time: I remember the drive home from hospital with Lyla on the M56 was hair raising – I had the senses of a cat – I could smell that speeding driver from 5 miles away. I wanted to scream at everyone, “Slow down! Use your mirrors! I have the most precious cargo in the world! – please be careful!” 15mph never felt faster.

Once home, it just felt right. Exhausting, but right. I never had that moment of, “Good grief – we’re now in charge of this person – aghghgh!” It just felt normal and that we were where we should be. I went home the day after Lyla was born, but with Britta I told them on the delivery unit that we wanted to go home right away. They had a bed ready on the ward, but as it was my birthday I wanted out of there and to get home and have cake and a glass of plonk (maybe I shouldn’t have told the midwife that!).

The best/worst advice: I don’t think Mothers have ever been more scrutinised or discussed as we are today. You can’t turn on the radio or TV or open a paper without some pundit or expert discussing the shortcomings of working mothers or stay at home mothers – how adversely we are affecting our childrens’ emotional development or smothering them to the point of malfunction.

We have an over-abundance of advice both good and bad and it’s often hard to wade through it all.

Talk to your friends, be honest with them about how you feel and how you’re coping. Don’t assume everyone is doing it well apart from you and you may be surprised to hear that everything isn’t rosy in their garden either – a problem shared and all that . . .

People who tell you, “Ah! These are the wonder years!” when your six week old hasn’t slept for, ooo about six weeks and you feel like you’ve been run over by a train – put it in the bin.

The main thing to always remember is no one EVER judges you as much as you’ll judge yourself – so if you give yourself a break, that’s more than half the battle.

Oh and as a friend once told me when I was delirious with lack of sleep and a screaming child – it really IS OK not to like your child sometimes (but they don’t tell you that in the movies..)

The hardest part of being a mother: Going through pregnancy loss was very hard for me – and I know people think they’re comforting you when they say, “Don’t worry – you can try again,” and,  “It was meant to be,” but I always found that so crass. I’m also aware that people simply don’t know what to say when you lose a child.

I remember one heavily pregnant woman saying to me, “At least you get to wear clothes with waists – look at me!”

The best ever comfort I got was a woman I didn’t know too well actually who just looked me straight in the eye and, “That’s a shitty thing that happened to you. I’m so sorry – you didn’t deserve that” – no attempt at explanation, no words of hope for the future. Just an understanding.

The biggest challenge now is the constant boundary pushing, which with two girls (of different ages) who are pushing two very different boundaries can seem overwhelming. I really don’t know where us parents find that extra reserve of patience when we’ve just been asked, “Why?” for the 900,000th time that day, whilst another child is trying to climb into the washing machine.

Oh and as low points go, having my lip split by a thrashing toddler two hours into a 7 hour flight was pretty much as low as I ever thought it could get. Then as I tried to mop up the blood she threw up. Allllllll over me. Those airline blankets really don’t make a good outfit, no matter how you try and accessorise.

The best parts of being a mother: The love. How to even begin to describe it? Remember when you met your partner and you thought about them all day and felt excited when your phone rang because it might be them and thrilled when you knew you were meeting later and then so screamingly delirious when they said they loved you? Like that times a million. But with a bit more puke.

Hopes for your family: Britta has a really rare condition called mastocytosis, which wasn’t diagnosed until she was 8 months old which can cause nasty cramping and wheezing as well as skin lesions. I hope we continue to manage the condition, as she can get on with life really well at the moment. I hope too that she’s part of the 60% who grow out of the skin lesions part of it, as it’s hard to see people point and stare at your child, but not as hard it will be for a teenage girl to go through that.

What advice would you offer to new and expectant mums: Strap yourself in – it’s the ride of your life. Whatever you expect this to be – it will surprise you. Parenthood brings you the most heart-bursting joy you can imagine. The love you feel is beyond anything you could dream of. But you know – there is also frustration, despair, absolute fatigue like you can’t believe and of course that food in your hair too.

One thought on “Sam, Lyla and Britta”