I couldn’t wait to be a mother but Katie was born a week short of 4 years after we married. I had 2 brothers, one of whom was 3 years younger than me and I had great memories of his first year. I loved the smell (it must have been Johnson’s baby powder) and maybe I loved the fact that he was a small person I could boss around. We were always very close, closer than my older brother who was only two years older than me.
Reality of Motherhood: In my early teens I saw the original film of ‘Cheaper by the Dozen’ (a true story and much better than the modern re-make – the father being one of the first ‘time and motion study’ people in the States) and decided 12 would be a good number! Of course I thought it would be all fun, and hadn’t realised the writer was rather well-off and in a rather different league to us, nor just how much children could be hard work!
In addition I had serious back problems. I had a slipped disk and an operation before Katie was born and then more trouble – two more disks slipping – when Chris was 5 months old. This resulted in 7 weeks on my back and parents-in-law coming alternately each week to look after me and the children. I was discharged after traction and heat treatment but was still in pain and thinking it would be forever.
It took ten years before I was quite free of the pain, and that wasn’t the last time I had problems, but not on the same scale again fortunately. I realised along the line that it wouldn’t be practical to have 12 children, but was still delighted after it all that I had six. I can’t even regret the one I might have had (miscarriage at 3 months, probably a boy) because the other three wouldn’t have been the same people if it hadn’t happened.

Taking your children home the first time: I was really looking forward to this. In those days we were kept in hospital for a week. My only problem was that I not only found it easy to feed my baby myself, but I was perhaps keeping half a dozen premature babies alive too! This created some embarrassing episodes back home when there was only one hungry person to feed.

There I was on my own for the afternoon, baby asleep like a little lamb, and wondering what to do with myself. It didn’t last. I was determined to do everything right so after tea it was bath-time and then feed. My sister-in-law had come over for the evening so helped me with bath-time which was pretty awful. I had no idea how slippery a tiny baby can be when well soaped and was very quickly in quite a panic. Then the feed – and a lovely four hour sleep again? My baby had turned out to be the clockwork kind. Wriggly but so well-behaved. Oops! Not this time. She definitely did not want to go to sleep. I spent a good part of that first evening in tears. All three of us tried walking her round the room, my husband, me, Auntie, but nothing would pacify her, alternately grizzling, howling or just, probably, enjoying all the attention. In no time at all I was in tears and soon realised how useful it was having another – detached – person around even though she had no experience of looking after babies at all.
That was in fact the start of a classic case of three months colic, ideal behaviour all day and night, feeding every four hours without fail – except for that slot from 6 pm till 10 pm until she was awake for longer – and longer – and longer…. and my realisation too of who was quite definitely the boss!
From the start she could wind her Dad round her little finger – and he’d shown no interest in her when visiting in the hospital. (He just didn’t like hospitals, but I’d been scared that he wasn’t ‘bonding’) I’d have been lost without him over the following weeks…years!

The best/worst advice: Fortunately I didn’t have too much advice at all and did find some books like the one which diagnosed the three-month problem (which I didn’t have with any of the others) and stopped me worrying too much. The worst advice was that I should put the baby in the pram and park her at the end of the garden where I couldn’t hear her cry. There was no way I could think that was a good idea and I’d never tell anyone else to do that. I don’t think very small babies are ‘naughty’ – they cry for a reason even if it’s hard to find out what it is.

The hardest part of being a mother: It becomes your identity for a while. You live through your children for a bit, terrified in case anything bad should happen to them, though you get this into better perspective with more children. Keeping a consistent attitude with discipline is the other difficulty, give in one day and have to put up with the consequences the next!

The best part of being a mother: The sense of pride, the sheer joy of having your baby smile and put out his/her arms to you. I still love walking along with a granddaughter, her small hand in mine in complete trust. 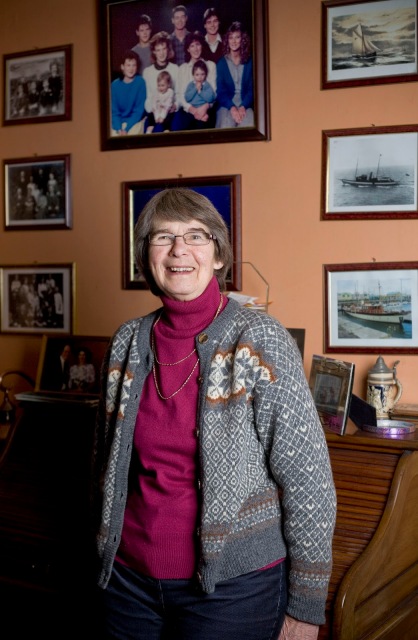 Hopes for your family: Not so many families grow as much as mine – 8 of us for a start (2 parents and 6 children), then 18 grandchildren ranging from ages 27 years down to 2 years – and now two great grandchildren mixing up the generations.
I find this a difficult question as now it’s some of my children who face the problem of their children ‘leaving the nest’ or being once again a household of just 2.
My worries about any of them facing starting school, leaving school and so on are so long ago they are difficult to remember. We had our worries but thank goodness I  can now just enjoy their company as adults and equals and am immensely proud of them all.
Advice to new and expectant mothers: Basically you know best about your own baby – their likes, dislikes, odd quirks of behaviour etc. You also need tons of patience so get practising straight away!
Remember your baby is a person from the start, and talk to him/her right from the start. It doesn’t matter if they don’t understand a word, they soon will. Don’t worry if people think you are odd talking to a tiny baby while out shopping. I’ve had some funny looks from time to time but it really works!
If you can, join a mother and baby or toddler group coming together just to play – it’s as important for your child to meet other children as it is for you to meet other mums and ‘grandmums’. There was next to nothing when my children were growing up but taking grandchildren to a ‘play group’ made me realise just how much they gain in self-confidence and all sorts of skills in a well-run group with plenty of equipment.
I’ve recently rejoined a group I took my youngest daughter to when she was 11 months old, now taking her daughter. Watching other people’s babies week by week is still fascinating – you don’t see your own child’s progress in the same way as it seems to happen so slowly. On my own the weeks sometimes dragged by with no apparent change and I often felt very tied down with no time to myself. I didn’t meet other mums till I reached the school gates with mine! There are far more opportunities now – if you don’t know any other young mums near you, start by looking in the local library for notices and many have storytime or other sessions for toddlers.
Finally, if you think small babies and toddlers are difficult – just wait till they hit the teenage years…..and know everything.