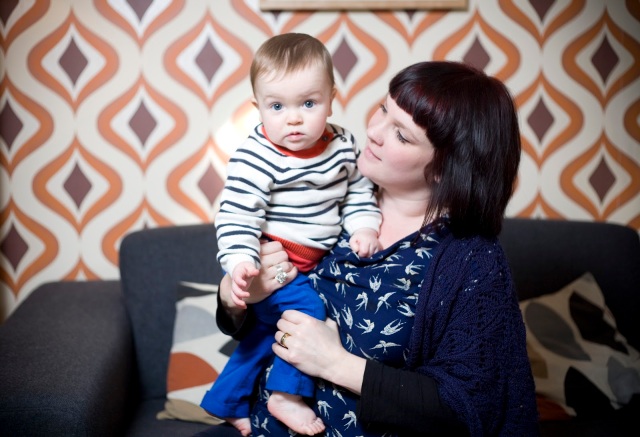 Expectations of Motherhood: I’m not sure I had many expectations of motherhood as such. I knew it was supposed to be hard being a mum and that I would always worry about my child. I knew it would be tiring and I knew I wanted for the baby to be born so I could sleep on my tummy again and stop itching. I hadn’t really given much thought to anything past the birth. All the antenatal course talks about is pain relief and breathing, so thats all I thought about. In blissful ignorance I booked tickets for a load of events in early July thinking by the time the baby was about 4 weeks, I would be sorted. Needless to say I attended none of these events.

Reality of Motherhood: I never understood the idea of relaxing before the birth, its not like you can ‘bank’ sleep and then use it as a voucher system when you need some more, but I didn’t realise how much labour – and indeed my 3-day-from-start-to-finish labour extravaganza – would sap any reserves you might have stored. I feel like I started on a back foot having such a long labour, and so the initial hormone-laiden, sleep-deficient, emotional first few weeks hit me like a sledgehammer.

I remember wandering round town in the blazing sunshine, pushing the pram and crying under my sunglasses with sheer exhaustion. It seems silly to think now, that 9 months ago, I would dread my husband leaving for work and leaving me with Joe, and that the first few weeks I literally took one day at a time, getting through it till he came home to help. Its not that I didn’t love Joe, its just that I didn’t know him. The routine of feed, sleep, nappy change was so relentless, through my bleary, dry eyes it looked like my life had come to a full stop. Three weeks on (having met up with my mum friends) and I was breastfeeding in the middle of the pub without a care in the world. As the months have passed and Joe has grown into his own little person, my love for him has grown to the point where I can’t bear the thought of him going to nursery and not hanging out with him everyday, So in reality, motherhood has been twice as hard and a million times more rewarding than I ever imagined and I absolutely love it.

Taking your child home for the first time: I couldn’t wait to get out of hospital, mainly because I couldn’t stand another prepacked strawberry trifle, but also because I wanted to have my family all together at home. I’d been kept in the hospital for an extra couple of days as I was having trouble breastfeeding, but I was terrified once I got home that Joe was going to starve. I wouldn’t go home till I had a back up plan, so I made Matt take a detour to Mothercare on the way home to pick up some emergency formula. I ran in, grabbed some formula, bought an entertaining bear babygrow and hat with ears set and legged it back to the car, where Matt was sat staring at our brand new baby in the rear view mirror. He drove home like he was carrying a car full of loose eggs. He said It was the most stressful drive of his life and I believe him. When we got home, we put the car seat in front of the settee, sat down and said ‘what happens now?’. 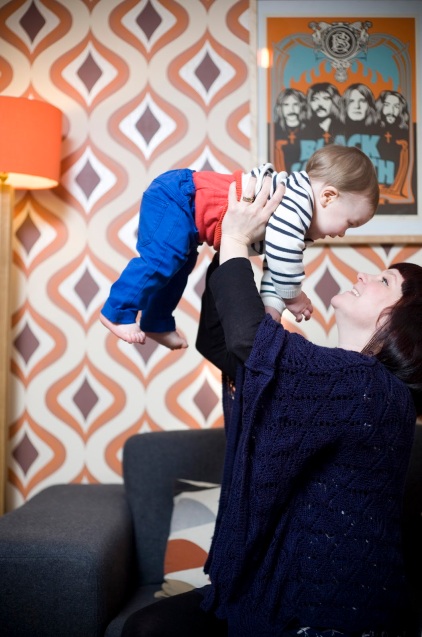 The best/worst advice:
The best emotional advice I got was just after Joe was born and was along the lines of, ‘Yes it can be pretty awful at first but it gets loads easier’. It kept me going through a tough few weeks. It wasn’t advice, but a couple of friends just bought round my lunch and held Joe whilst I ate it. Amazing.

The worst advice I had was to make loads of stuff for the freezer. Not having a microwave meant that we would have to wait 30 minutes for the food to cook in the oven anyway (and thats if we remembered to take it out of the freezer) – by then anything could have happened – most likely he’d woken up and was feeding again. So for a few weeks nearly all food was eaten cold, whether it started off that way or not.

The hardest parts of being a mother: Here’s the top 3 off the top of my (weary) head:
Lack of sleep: At best renders you incapable of mental arithmetic, at worst turns you into some kind of Mumzilla. I don’t think I’ve ever needed coffee in the morning so much in my life. And there’s no catching up with sleep, once its gone, its gone forever because they don’t lie in just because you need one!
Breastfeeding: I breastfed for 8 months and had periods of really struggling with it. I found it very rewarding watching Joe stack on the weight solely from what I had provided him with, and soul-destroying when he was hungry again after an hour. I had a love/hate relationship with it, it was convenient, cheap and I felt it was best for him. It was also at times painful, tiring and I was tied to him as he wouldn’t take a bottle. I opted to carry on despite having issues which leads me onto…
Always feeling guilty: Should I move him to formula? Is he having fun? Have I stayed out the house too long having a coffee with friends? Do I read him enough stories? Do I take him to enough activities? Do I take him to too many activities? Did he get that cold from that half-hour he didn’t have socks on? Will he think I’ve abandoned him when he goes to nursery? And so on, forever.

The best parts of being a mother: Unlike most things where you get out equal to what you put in, motherhood rewards you in buckets for every dirty nappy you change.

I’ve learned loads of stuff. I know when he’s doing an attention cough. I know when crying because he’s tired as opposed to hungry. I know he’s not hungry, but wants milk because he’s tired. I know loads of stuff about him. I’m an expert on him. I could win Mastermind if he was my chosen subject. No one has taught be this stuff, I’ve not read it, or had it implanted in a chip in my head. I’ve learnt it from my baby boy. He’s taught me.

It makes me feel more proud than I have of anything else in my life, and every time he does something clever, cute or new, I can physically feel myself swelling with pride. I don’t think there is a day when he doesn’t literally fill my heart with joy.

Hopes for your family: That Joe will always feel safe, loved and happy and has the foundations to make sensible decisions is his life. That he has good manners and treats people well. That he grows up to be the kind of boy you would bring home to your mother. That he listens to all advice, but only follows the good. And that he will still visit his folks when he leaves home.

What advice would you offer to new and expectant mums: My best advice would be to not put any pressure on yourself to be a Supermum in the first few weeks. Don’t expect to be being clean and showered, or that you will get any housework done, or that you’ll do much more than feeding, changing nappies and rocking to sleep. If you’re lucky your baby will sleep somewhere other than you, but somedays I wouldn’t put Joe down until bedtime. Once you have accepted that you are dirty, exhausted and the house is a tip – enjoy it! As hard as it is, and it is hard, remember that in a few months, you’ll have to chase them round the house for a cuddle. They weren’t joking when they said ‘they grow up so fast’.

On a practical level invest in a sling, so you can carry them around whilst you do things like make a sandwich, get loads of dvds to work your way through whilst you are trapped on the settee and as soon as is humanly possible meet up with your new mum network. You can guarantee they will all be unwashed, knackered and escaping a messy house too…

Oh, and don’t buy a top and tail bowl.

One thought on “Lynda and Joe”