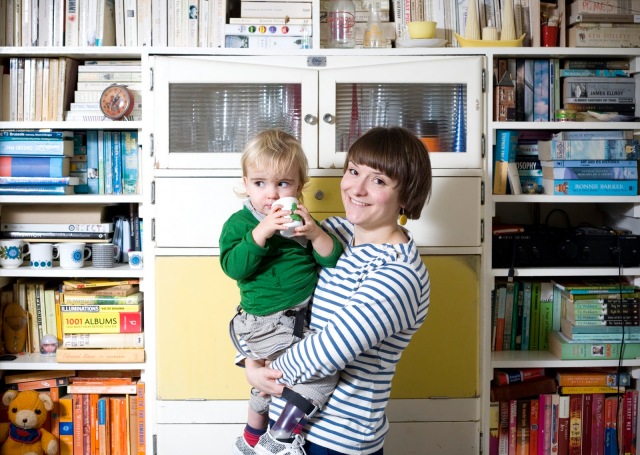 Expectations of motherhood: I had to remind myself throughout my pregnancy, especially near the end, that it wasn’t just about the birth. I was so consumed with how I was going to get him out, that I almost forgot that he was going to be with me forever. Everyone tells you about the exhaustion, and the sleepless nights, but I don’t think this is something you can ever really understand until you’ve had a baby, so it didn’t worry me too much while I was pregnant. My husband and I had been watching our friends closely over the years as they had children – so I wasn’t completely naive about motherhood, but the labour did take up more of my thinking time than what the next twenty or so years would be like. I was worried that I would never be selfless enough to be a good mother – a worry that is still with me nearly two years in.

Reality of motherhood: The reality is that I still feel very much the same – like a little girl playing house – but with a little boy to hang out with, and try to look after as best I can. I think I thought I would turn into a ‘proper grown-up’ when Herb was born – but this hasn’t happened as yet. There are many realities of motherhood – I can now multi-task to the extreme and as a working mum, I feel guilty all of the time, our house is not as clean as it could be and I am always covered in something slimy…

However, the other realities are that the smallest things give me the most brilliant joy. Herb eating toast has always made me smile inside and out – his greasy fingers holding the crust – little finger held up to the side like a posh lady drinking tea. Words cannot describe the overwhelming wonderfulness of the reality of motherhood. The intense thrill at watching someone you made and grew learning the ways of the world is my favourite reality of motherhood.

Taking your child home for the first time: Herb’s dad and I were really paranoid about having a ‘clingy’ baby – so launched into our very first night at home with ‘controlled crying’… At 4 o clock in the morning, after Herb had been crying for maybe less than 5 mins, Joe threw down his arms in exasperation exclaiming he ‘had never known anything like it in his life!’ Luckily this made us laugh a lot, probably deliriously, and we realised this was true. We really had never known anything like this in our life, but we had it forever now so we had to work with it. The controlled crying obviously didn’t work and we struggled through night one. (The midwife kindly informed us the next day that we shouldn’t really try this method until Herb was at least a few weeks old! )

The best/worst advice: The best piece of advice I got was from my great friend Fleur, who admitted she did not experience the ‘overwhelming love’ when she gave birth to her first son, like we are all told we will. Fleur warned me that the love grows, and maybe even slowly at first while you get used to each other. I instantly felt protective of Herb, but I did feel like he was a tiny little stranger in our house. He didn’t really smile until he was 10 weeks old too – which didn’t help! I know this might seem like the most terrible thing to admit, but it it’s true and it is this piece of advice I will pass on to others as there is so much pressure put on mums to feel/behave in particular ways. Becoming a mum for the first time is overwhelming and huge – and we should be allowed to do it all in our own way – and trust that all feelings are natural and valid.

I can’t remember any bad advice. Although I think the contradictory advice on breastfeeding puts un-necessary strain on new mums.

The hardest part of being a mother: At one year and ten days old, on 17th March 2010, Herb had a stroke – the cause of which has never been definitely identified, although it was most probably due to a very high temperature down to an infection. We are very lucky the stroke was small and the damage done, relatively slight. His recovery is naturally slow, and although great so far he has very definite weakness in his right side. He has learned to walk, but has to wear a little splint to help and his right leg is now shorter than his left. He has developed good manual dexterity in his right hand, although he favours the left – especially when he’s eating! We have regular appointments with various health officials, from physios to paediatric neurologists – all of whom are completely amazing and supportive – and I think we will be seeing them for the next few years at least.

And this is the hardest part of being a mother: the fact you can’t just crumple and give up. The fact you love you child more than you ever thought it possible to love anyone and that any hurt/pain suffered by them physically pains you too – and that all you want to do is take their pain away and make it yours. That you would do anything to make them happy and well, and the fact that sometimes there is nothing you can do but hope.

Herb being ill was without a doubt the most terrible time of my life and has left me somewhat lunatic with regards to his health, and at times feeling lonely and heartbroken, but on a positive note, I do believe it has made my family and I stronger and, hopefully, more aware of others’ hardships too.

More hard things: the constant guilt – the fact I can’t give Herb all my time because I have to go to work, and that someone else gets to see him smile, play and laugh all day. And learning to be patient.

The best parts of being a mother: The intensity of emotion – seeing delight in Herb’s eyes, laughing with him, smelling his hair, feeling his love through his spontaneous hugs and adoring glances. Witnessing his strength in recovery, his patience and concentration; every time Herb chooses his right arm and hand for an activity my heart sings. When Herb had his stroke he could not lift his right arm and so could no longer suck his thumb, his natural ‘soother’.  It was crushing to watch him try and get his thumb to his mouth and not be able to – heartbreaking to know that such a simple comfort had been taken away from him. Day six of our hospital stay and as Joe put Herb to bed in his hospital cot, he made it. Thumb reached mouth and Joe and I sobbed with relief, heaving with heavy hearted joy as we knew this teeny step was a momentous one.

The best part of being a mother is watching Herb, my son, growing into a little boy and doing all the things little boys do.

Hopes for your family: I hope with all my everything that Herb always gets to do everything he wants to do in the future – from playing the guitar to running a race. The simple things.

I hope we always laugh together and like each other. And I hope my little boy is the kind of son who regularly calls his mother. ..

Advice for new and expectant mums:  In a very quiet voice, (as I recognise this could be a little annoying – and I was just very lucky) I would recommend hypno-birthing – it worked a treat for me. But in a loud voice I would recommend trying to ignore everyone’s advice and just go with the flow – do what you think is best for you baby; try not to look for patterns – they change every day; relax and have a lovely time!

Gemma makes bespoke children’s armchairs (such as Herb’s lion one) and quilts. They can be made to order.

2 thoughts on “Gemma and Herbert”