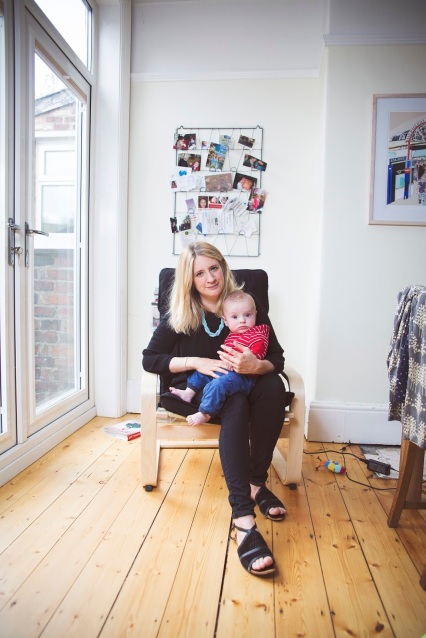 Expectations of Motherhood: I have always known that I wanted to be a mother. I am very close to my Mum and I can only hope that I will have an equally strong bond with my own children.

I didn’t meet my husband Ronan until I was thirty three. When we started trying for a baby it took quite a while to conceive, so when it happened we were ecstatic. I was very superstitious during my pregnancy and was afraid that something might go wrong. Although I loved my bump I couldn’t imagine the baby that would eventually come out, so I didn’t prepare a nursery, buy any clothes etc. The only thing we bought was a pram and everything else was kindly handed down to us from my sister.

Reality of Motherhood: I found the first three months pretty tough. George basically cried whenever he wasn’t feeding. The period from 5 weeks till about 3 months was the worst – I nicknamed it the ‘all night disco’. George would initially go to sleep for a couple of hours then be pretty much up from about 2am onwards with colicky symptoms. I found the sleep deprivation very hard to cope with, but people kept telling me it would get easier and they were so right. Watching George develop and change daily is beautiful. Being a mother feels so natural and has made me happier than I have ever been.

Taking your child home for the first time: I was totally shell shocked and exhausted after pretty much no sleep for five days. I ended up having to have a caesarian and was prescribed a cocktail of antibiotics and painkillers. The three of us lived in the living room for the first few days grabbing snoozes when we could. I’m so glad we didn’t have any visitors for the first week. Those first few days together bonding and surviving as a new family are so important.

The best/worst advice: The worst advice had to be, ‘Sleep when your baby sleeps’ – what do you do with a baby who doesn’t sleep!

The best advice was from my sister about establishing a routine. I began a bedtime routine when George was about six weeks old. It is true babies really do appreciate the consistency and predictability of following a set pattern each night, and although it took a while to establish, as soon as I play the bedtime music now George knows exactly what’s happening. He relaxes, enjoys his bath and self settles himself to sleep.

The hardest parts of being a mother: Breastfeeding is one of the hardest things I have ever done. For something that is supposed to be so natural there was a lot of pain and discomfort. The pain of latching George on in the early days was excruciating. I would often cry with pain and send Ronan out of the room. When feeding was eventually well established and pain free at about six weeks I found out that George wasn’t gaining weight and he had dropped from the 75th to the 9th centile. I was heart broken, I fed him constantly and he wasn’t putting on weight – I couldn’t believe it. My Doctor and Health Visitor advised me to give him a formula top up. The first night that my husband gave George some formula I was distraught. He gulped it down. I was so upset that this little creature who was so dependent on me would happily take milk from a bottle.

A friend sent me an article from The Telegraph entitled ‘Breastfeeding may be best, but bottles of formula milk aren’t the end of the world‘. The article basically said that lots of mothers don’t produce enough milk and just because breastfeeding is natural it doesn’t mean it works for everyone. Reading the article really helped me to lose the sense failure I felt for not being able to exclusively breastfeed. It was also reassuring to find out that my Mum had a similar experience feeding the four of us. 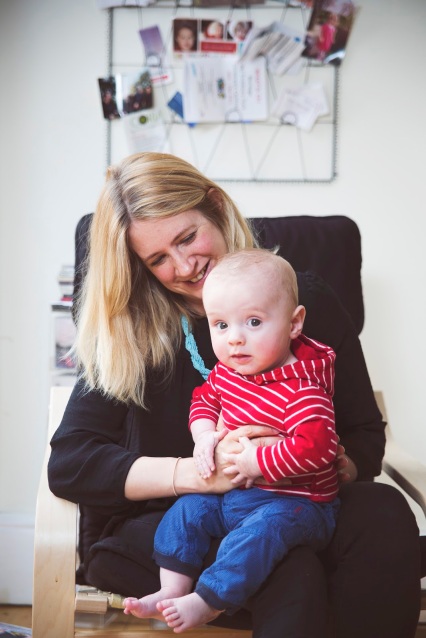 The best parts of being a mother: Seeing George’s face light up in the morning and the way he kicks his legs in excitement when he sees me. Cuddling him and making him laugh. The love I feel for him is indescribable and I appreciate how lucky I am to have him.

Has becoming a mother changed you? As George is only six months old I think I am probably in the honeymoon period of being a full time Mum. I love my new life. At the moment I can’t imagine going back to work and being apart from George for more than a few hours. Everything I do and plan is about George.

I have found though, that since becoming a mother I have definitely had to be tidier and more organised. I no longer worry about silly things.

Hopes for your family: I come from a family of four children and am very close to all of my brothers and sisters. I would love nothing more than for George to have a brother or sister sometime in the future.

What advice would you offer to new and expectant mums? The early days turn to weeks and the weeks to months and before you know it that tiny helpless newborn is a sturdy little vegetable scoffer. Try and enjoy every stage because the time really does fly by.

The advice, support and friendship gained from my NCT group has been invaluable, so I would definitely recommend attending a course. The breastfeeding support groups at my local Sure Start centres have been amazing. Talking to other new Mums in the early days kept me sane.

If you decide to breastfeed resign yourself to the fact that a newborn will be attached to your breast twenty four seven. The lady who ran the NCT class told us that you will barely have a chance to make a sandwich. I remember thinking how ridiculous, but she was right. Make yourself a little breastfeeding station with lots of water and food. I was permanently starving. Order yourself some box sets and try and enjoy the hours of cluster feeding. As they get older, babies become very efficient feeders and I now miss those long feeding sessions; just the two of us snuggling up together.

Never say never – a dummy, white noise and rocking all proved to be lifesavers in helping George to settle in the early weeks.

Here are a couple of articles I found very reassuring:

2 thoughts on “Cathy and George”